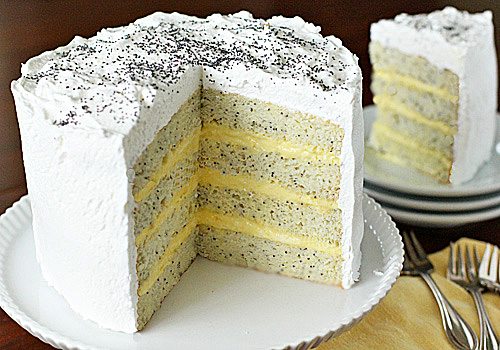 If you are still undecided about what dessert you will be making this weekend, here is another idea to throw into the mix.  We had dinner with family this past weekend and I offered to bring dessert.  A nice byproduct of bringing dessert was the opportunity to make this cake.  This is one of those recipes that I tore out years ago (Martha Stewart Living, April 2003, page 207 to be exact) and filed away in my stack of to-dos.  It is a simple white cake studded with poppy seeds, layered with lemon curd that is lightened with whipped cream, then blanketed in a white, marshmallowy seven-minute frosting.  It is light, lemony, sweet, and just perfect for this time of year.
The only change I made was to use a packet of whipping cream stabilizer for the heavy cream to keep it from weeping once folded with the lemon curd.  Overall this is a great recipe, but preparing the cake does require a bit of time in order for the filling to set properly.  However, the filling and the cake can be made the day before, then assembled the morning of and frosted.  Just remember-- due to the lemon curd filling, the cake needs to be chilled.  I don't know why it's called "Lady Cake".  I do know that this layered beauty gets a thumbs up from men and women alike.

Printable Recipe
Lemon Poppy Seed Lady Cake
makes 1-8 inch four layer cake
For the Cake
1 cup (8 ounces) unsalted butter, at room temperature, plus more for the pans
3 cups sifted cake flour, plus more for the pans
1 1/2 Tablespoons baking powder
1/4 teaspoon kosher salt
1 3/4 cup granulated sugar, divided
1 1/4 teaspoon pure vanilla extract
2 Tablespoons poppy seeds, plus more for garnish
1 Tablespoon finely grated lemon zest
1 cup milk, at room temperature
8 extra large egg whites, at room temperature
1/8 teaspoon cream of tartar
1 cup heavy cream, chilled
1 .35 ounce packet of whipping cream stabilizer
For the Lemon Curd
6 extra large egg yolks
3/4 cup granulated sugar
1 Tablespoon finely grated lemon zest
1/2 cup freshly squeezed lemon juice
4 Tablespoons (2 ounces unsalted butter, cut into 1/2 inch cubes
For the Seven-Minute Frosting
1 3/4 cup granulated sugar, divided
2 Tablespoons light corn syrup
1/4 cup water
6 extra large egg whites
For the Cake
Preheat the oven to 350º F.  Line two 8-inch cake pans with parchment circles, butter, and dust the bottom and sides with flour, tapping out the excess.
In a medium bowl, sift together the flour, baking powder, and salt.  In the bowl of a stand mixer fitted with the paddle attachment, cream the butter on medium speed until light and fluffy.  Gradually add 1 1/2 cups of the sugar and beat until fluffy, about 3 minutes.  Scrape down the sides of the bowl and beat in the vanilla, poppy seeds, and lemon zest.  Reduce the speed to low and add the flour mixture in two batches, alternating with the milk.  Beat until thoroughly combined.  Scrape down the side of the bowl and beat for 10 seconds more; set aside.
In a separate bowl, whisk the egg whites and cream of tartar on low until foamy.  Increase the speed to medium-high and gradually add the remaining 1/4 cup of sugar.  Whisk until peaks are just stiff.  Gently fold whites into cake batter in three additions; do not over mix.  Divide the batter between the prepared pans and bake until golden, about 40 minutes.  Transfer the pans to a wire rack to cool completely.
For the Lemon Curd
In a medium saucepan, combine the yolks, sugar, lemon zest, and juice.  Cook over medium heat, stirring constantly until the mixture is thick and coats the back of a spoon, about 8-10 minutes.  Press the mixture through a fine mesh sieve set over a medium bowl.  Add the butter and stir until the butter is completely incorporated.  Press a sheet of plastic wrap against the surface and chill until firm, about 1 1/2 hours.


For the Filling
In a medium bowl, whip the heavy cream and packet of stabilizer to soft peaks.  Gently fold in the chilled lemon curd, cover with plastic wrap and refrigerate until chilled and firm, at least 2 hours.


To assemble
Invert the cooled cakes from the pans and peel off the parchment. Using a serrated knife, slice each cake in half horizontally to make a total of four layers.  Place one of the bottom layers on a serving plate with several small squares of parchment under the edges to make for a clean finished edge once frosted.  Spread 1/3 (about 1 cup) of the filling over the surface and place another cake layer on top.  Repeat with remaining filling and cake layers.  Place five 10-inch wooden skewers in the cake (one in the center and four around the edge) to keep it from sliding.  Loosely cover the cake with plastic wrap and refrigerate until firm, at least 2 hours.


For the Frosting
Combine 1 1/2 cups sugar, corn syrup, and 1/4 cup water in a small saucepan.  Cook over medium heat, stirring gently until sugar is dissolved.  Bring the mixture to a boil, washing down the sides with a wet pastry brush to prevent crystallization.  Continue boiling until a candy thermometer registers 230º F, about 5 minutes.  Meanwhile, in the bowl of a stand mixer fitted with the whisk attachment, whisk the egg whites on medium speed until soft peaks form.  Gradually beat in the remaining 1/4 cup sugar.  When the sugar syrup has reached 230º F, reduce the mixer speed to low and carefully pour the syrup into the egg whites.  Beat the frosting until it is cool, fluffy, and glossy, about 7 minutes.  Remove the wooden skewers.  Frost the top and sides of the chilled and set cake.  Garnish with additional poppy seeds.  Carefully remove the squares of parchment from under the cake.  Slice and serve.  Enjoy!