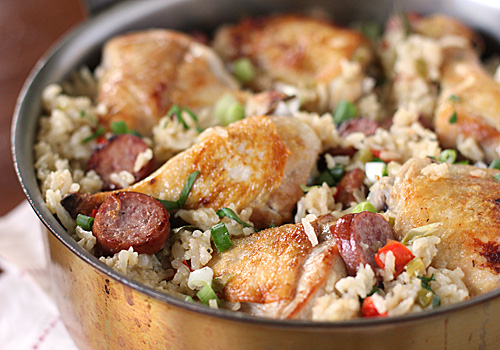 If you are a reader, you may recall that I spent several years in Louisiana during my childhood.  I have many fond memories of Cajun/Creole country, but it is the food that stands out the most.  Mardi Gras is next Tuesday and although I will not be hanging out on Bourbon Street saying "Throw me somethin' mister", I will be enjoying a festival of foods between now and then.

Jambalaya-- the mere mention of it puts that Hank Williams song in my head.  If you don't know what I am talking about, watch the movie Steel Magnolias and you'll catch my drift.  There are two types of Jambalaya (actually, there are three, but I'll just talk about the two most common versions).  The types are Creole and Cajun, both consisting of three parts; meats, vegetables, and rice.  Both use the southern holy trinity of onions, celery, and bell pepper, but the Creole version adds tomatoes and sometimes tomato sauce to the dish making it a "red" jambalaya.  Both are equally tasty and I have many recipes, but today I am sharing a Cajun version. 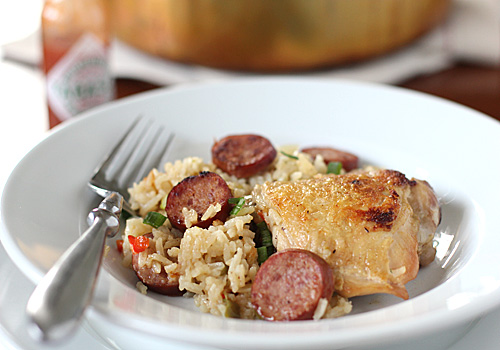 Garnish with a few chopped green onions, fresh parsley, and a couple of good dashes of Tabasco.  This is a one pot meal with deep flavor.  Bake up a batch of New Orleans French Bread and "whoooee, I gar-on-tee" (said in my best Justin Wilson voice) Hank Williams will be singing in your head too!
♪♬ Son of a gun, we'll have big fun on the bayou! ♪♬

Drain and reserve 3 Tablespoons of the drippings in the pan.  Add the onion, celery, and bell peppers and saute until softened, about 5-7 minutes.  Add the garlic and saute for another 2 minutes.  Add the cayenne, thyme, salt, and black pepper.  Stir in the rice and saute for 5 minutes.  Pour in the stock, add bay leaves, and bring to a boil.  Reduce the heat to a simmer. Return the chicken and sausage to the pan, cover and cook until the broth is absorbed and the chicken is cooked through, about 20 minutes.  Gently fluff the rice with a fork, cover and let rest for 10 minutes. Remove the bay leaves before serving.  Garnish with chopped green onions and fresh parsley.  Enjoy!