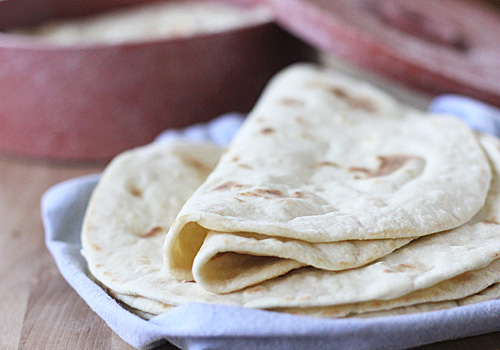 Fumaric acid and sodium metabisulfite-- sounds yummy right?!  Those, my friends, are just a few of the ingredients in store bought flour tortillas.  Might be why I have always been a little turned off by the taste-- foam board comes to mind.  Many of you probably wouldn't even think about making homemade tortillas, but it is really quite simple.  You most likely have all the ingredients on hand, and they are fun to make with a helper in the kitchen.
The first time I made tortillas I used all lard (mmm...laaarrd) and no baking powder.  They were good, but a bit too porky in taste and they looked greasy.  The second time around I used half vegetable shortening and half lard, as well as some baking powder.  The results were much better.  I couldn't believe what deep flavor and perfect appearance they had.  The taste and look of these tortillas really made it hard to ever buy store bought again.  In fact, I have even adapted the size of the recipe to make burrito size tortillas for burrito nights.
A visual always help when making a homemade product, so I have included some step-by-steps below. 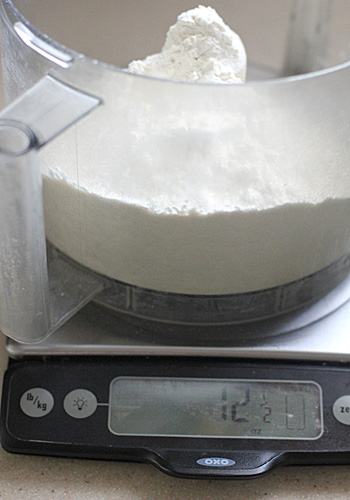 I like to measure my flour, but if you don't have a scale, make sure to use the scoop and level method.  Too much flour will result in a dense tortilla.  Add the baking powder and salt to the flour. 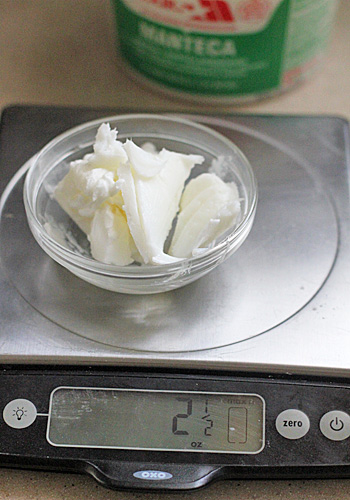 I also like to measure the vegetable shortening and lard; 1 1/4 ounce of each for a total of 2 1/2 ounces.  Please don't be afraid of using lard for health reasons.  The monounsaturated fat in lard is healthier than saturated fat while the little saturated fat there is has no effect on cholesterol.  But, if you really don't want to use lard, you can use all vegetable shortening.  Process the flour mixture, shortening, and lard until incorporated. 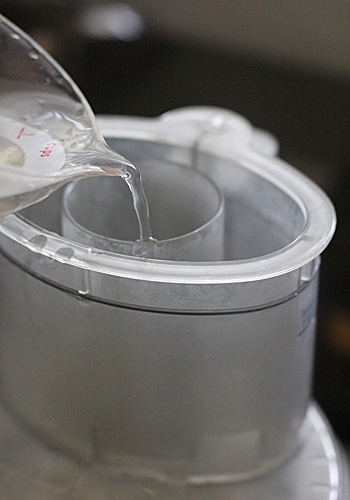 With the motor running, add the water and process until the dough just comes together in a mass. 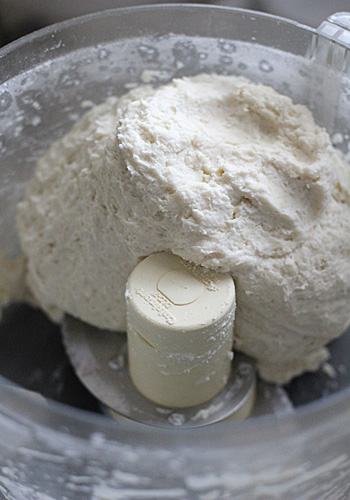 The dough should be soft, but not quite as soft as a bread dough. 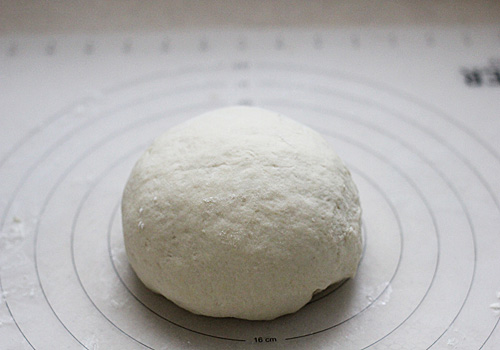 Transfer to a lightly floured work surface and knead until smooth. 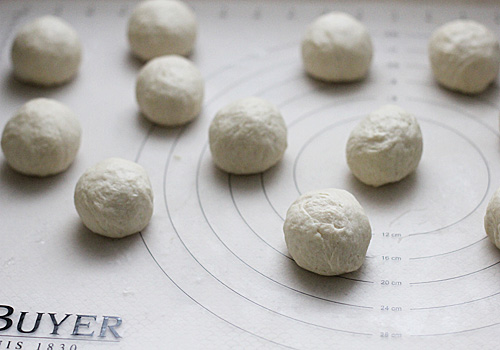 Divide the dough into 12 or 6 portions depending on the size of your tortilla.  Tacos or burritos?  Roll each portion into a ball. 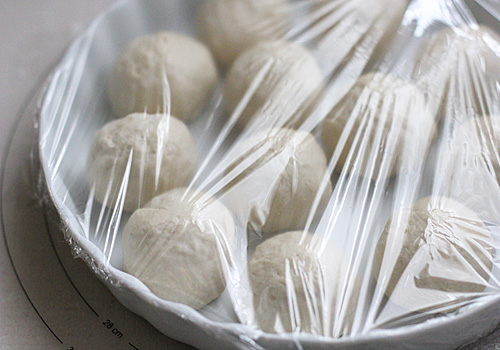 Place the dough balls on a plate, cover with plastic, and allow to rest for at least 30 minutes.  This allows the gluten to relax, making it easier to roll out the rounds. 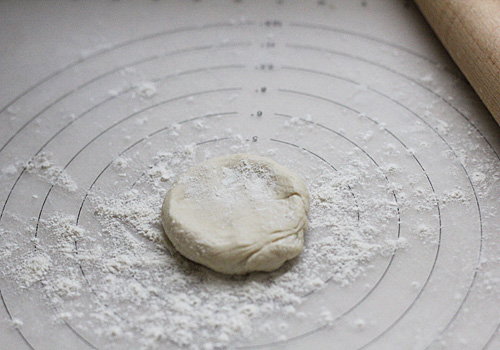 Working with one dough ball at a time, flour both sides 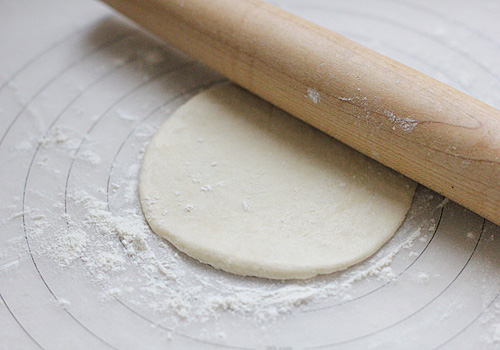 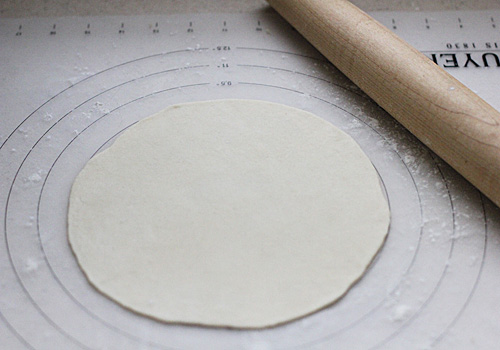 continue rotating and rolling until you reach an 8-inch or 11-inch round. 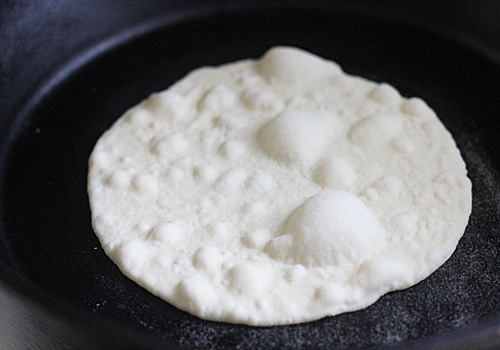 Lay the tortilla on a hot griddle or cast-iron skillet (you should hear a faint sizzle and an almost immediate bubbling across the surface).  When there are brown splotches underneath (about 30-45 seconds) 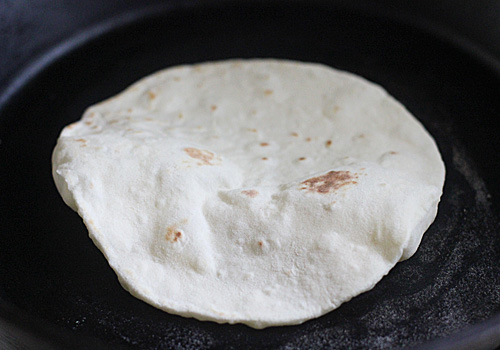 flip it over, and bake for another 30-45 seconds.  If you will be reheating the tortillas over a gas flame before serving, lean toward the 30 seconds to prevent them from overcooking. 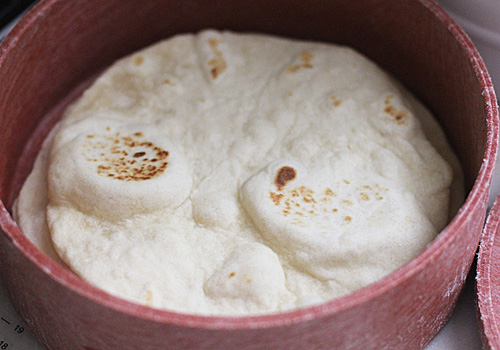 Place in a cloth napkin/clean kitchen towel or tortilla warmer (don't put the lid on until you have finished baking and stacking all the tortillas.  The heat from each subsequent tortilla will keep them warm.  The lid will trap too much moisture and make them soggy) and continue with remaining tortillas, stacking them on top of one another. 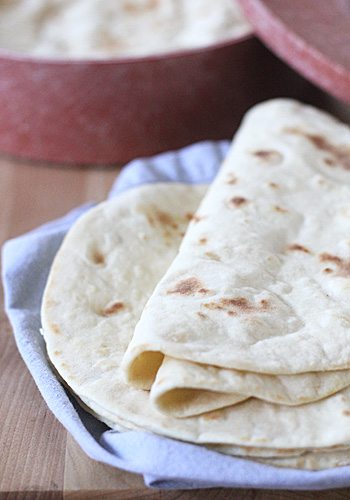 Tacos, fajitas, burritos, or just to have a simple bread on the table-- homemade tortillas are the way to go.
Printable Recipe

In the bowl of a food processor combine the flour, baking powder, and salt; pulse to mix.  Add the shortening and lard and process until incorporated.  With the motor running, add the water and mix until the dough comes together.  The dough should be medium-stiff consistency- not firm, but not quite as soft as bread dough.  Add a tablespoon of water if necessary. Scoop the dough out onto a lightly floured work surface and knead until smooth.

Divide the dough into 12 or 6 portions and roll each into a ball.  Set the balls on a plate, cover with plastic wrap, and let rest at least 30 minutes.  This allows the gluten to relax, making it easier to roll the dough.

Heat an ungreased griddle or cast-iron skillet over medium to medium-high heat.

On a lightly floured work surface, flatten a ball of dough, flour it, then roll forward and back across it once, rotate a sixth of a turn and roll forward and back again; continue rotating and turning until you reach a 7-inch or 11-inch circle depending on the size of the tortilla you are making, dusting with flour as needed.

Lay the tortilla on the hot griddle (you should hear a faint sizzle and see an almost immediate bubbling across the surface).  After 30-45 seconds, when there are light brown splotches underneath, flip it over and cook for another 30-45 seconds until the other side is splotchy brown (do not over bake the tortilla or it will become crisp).  Remove and wrap in a cloth napkin placed in a tortilla warmer.  Roll and griddle-bake the remaining tortillas in the same manner while stacking then one on top of the other.  Serve warm or at room temperature.  Tortillas can be made one day in advance and kept in an airtight bag. Well wrapped tortillas can be kept in the refrigerator for up to three days or in the freezer for up to one month (thaw completely in the refrigerator before using or rewarming).  Enjoy!