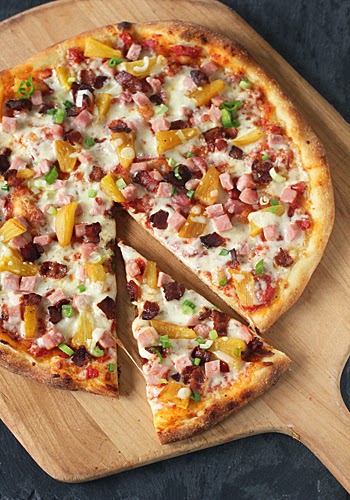 Ok pizza purists, stay with me here... Most of you know that I am a big fan of sweet and savory combos, but I have been unable to grasp the idea of putting pineapple on a pizza, not to mention calling it Hawaiian.  Trust me, I lived on Oahu many moons ago and I don't recall this kind of pizza.  It just seemed odd and against the "rules".  But let's face it--when it comes to pizza, there are no rules.  Well, that is unless you are talking about the true Neapolitan-style and you have to have a certain type of flour and such.  I get that.  But when you are slinging pies at home, anything is fair game in my book.

This week I had leftover ham from Easter and a fresh pineapple on the counter.  And since pizza is usually on my brain for dinner, all I could do was think about Hawaiian pizza.  Somebody PLEASE tell me why it is called Hawaiian and why it is the most popular pizza in...wait for it... Australia?!? Scratching my head.  Anyway, these were my thoughts--pineapple likes ham, ham likes cheese, and cheese likes sauce, and everything loves bacon, right?  Throw in a little green onion and serrano or jalapeño for some zing and...ok this might have to happen.

One thing that I was concerned about was the amount of moisture in the pineapple.  I didn't want that to soggy-up (that's not a word, but I use it) my crust.  So, I caramelized the slices of pineapple in a dry non-stick skillet.  This helped reduce the amount of moisture and intensify the pineapple flavor.  Another thing that I was concerned about was the sauce and cheese ratio to the other ingredients.  I knew this wasn't going to be a traditional pizza parlor flavor, so I used slightly less sauce and cheese than I normally would.  I wanted there to be a good balance of all the flavors going on so that one wouldn't overpower the others. Speaking of the cheese, I used two--mozzarella mostly and a bit of provolone.  I thought the sharpness of the provolone would pair nicely with the sweetness of the pineapple.  Also, when cooking pizzas like this at home, I shape the pizza dough, sauce it, then slide it on the stone for a few minutes.  This gets the crust going and it absorbs some of the sauce without over-burning the cheese.  Then I take it out, throw on the cheese and toppings, and put it back on the stone. I like my cheese just melted with a good brick oven crust.  Unconventional? Yes, but it works. 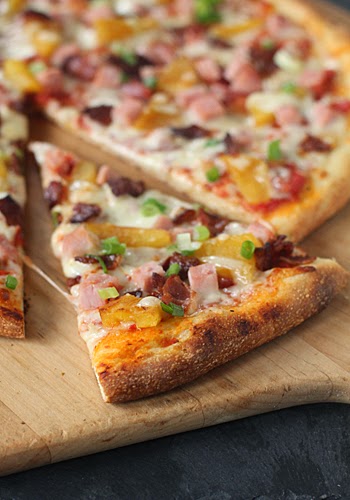 I have never been so scared, yet so pumped to eat a pizza.  Seriously, before I even assembled the pizza, I had all the ingredients out on the counter in bowls.  I stood there leaning over the counter sniffing from bowl to bowl.  I got the sweet, the savory, and the essence of the heat. Would this be just ok and weird?  Would it be a winner? Or would it be an epic fail?  Time for a taste test. Oh yeah people...we have a winner!
Printable Recipe

Place a baking stone on the middle rack (unless you know your oven better) and preheat the oven to 575º F (or as high as it will go) for an hour.

In a medium non-stick dry skillet, lay the pineapple in a single layer.  Heat over medium-high heat until the underside is lightly caramelized, about 5-7 minutes.  Turn the slices of pineapple over and turn off the heat.  Allow the pineapple to rest in the pan until the sizzling subsides.  Transfer the pineapple to a small plate; set aside.

On a sheet of parchment paper set on a pizza peel, stretch and form one ball of pizza dough into a 12-inch round.  Brush the edges with olive oil.  Spread 1/2 cup of the pizza sauce on top of the dough leaving a 1-inch border.  Using the peel, slide the pizza and the parchment paper into the oven and cook until the dough is just set, about 2-3 minutes.  Quickly remove the pizza from the oven, discarding the parchment.  Place half of the pineapple and half of the ham on top of the sauce.  Sprinkle with half of the mozzarella, half of the provolone, and half of the bacon.  Return the pizza to the baking stone in the oven and continue to cook until the cheese has melted and the crust is a deep golden brown with a few char spots.  Carefully remove the pizza to a wire rack (to prevent the crust from getting soggy) and garnish with half of the green onion and half of the pepper.  Allow the pizza to cool slightly. (Continue with the remaining ingredients for a second pizza.) Transfer to a cutting board and slice into wedges.  Enjoy!

Source: The Galley Gourmet with adaptations from the sauce and pizza dough from American Pie, by Peter Reinhart