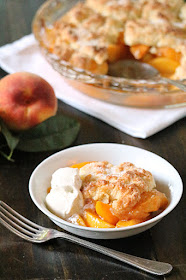 I most certainly couldn't tease you with pictures of my homegrown peaches this past Sunday without sharing a recipe.  And with all those peaches, I have already made this recipe twice this week and it's only Tuesday!

Cobblers are quite simple to make-- fruit filling and a biscuit dough.  This recipe calls for cooking the peaches first in a mixture of cornstarch, sugar, lemon juice (and I also add a bit of cinnamon because I like it).  So when choosing your peaches, you want to make sure you use ripe, but firm peaches.  Save those Southern "juice dripping down your arm" peaches for eating fresh, otherwise the fruit will break down too much when baking.  My variety is quite firm, so I do need to bake them a little longer, hence the 10-20 baking time range in the recipe.  Go ahead and check on your peaches while they are baking to achieve desired tenderness.

While the peaches are baking, make the biscuit dough. This dough is more similar to a shortcake than a biscuit, which makes for a delicious topping.  The tenderness in the dough comes from the addition of yogurt.  I use Siggi's Icelandic-style non-fat vanilla yogurt for little more flavor and ease on the waist-line, but you can use any whole-milk or low-fat plain or vanilla yogurt of your liking.  Just remember not to over mix the dough or the biscuits will be tough. It may seem a little dry, but it will become cohesive enough to make mounds. 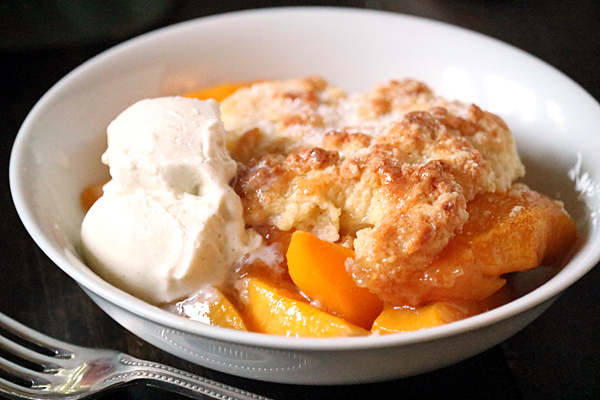 This recipe is baked in an 8-inch round or square baking dish and serves 6, but it can be easily doubled to feed a crowd.  Just use a 9x13-inch rectangular baking dish.  Serve warm with a generous scoop of good vanilla ice cream and...my jaws just cracked.  I think I'll be freezing some peaches to get me through the winter with this recipe!

*UPDATE-- If you received a Galley Gourmet e-mail, I accidentally omitted the yogurt from the written recipe.  It has been corrected.

I don't have a Sunday recipe to share, but I do have a couple of pictures.  It's been 90+ degrees here the past few days and my peach tree has been loving it! And so have I! We spent the morning, with the help from neighbors, harvesting our peach tree in our potager.  I know...peaches in Illinois?? This  variety, Reliance, was cultivated from The University of Minnesota. It can withstand our brutal cold winters.  It's perfect for canning, freezing, and making peach cobbler for dessert tonight😋🍑. 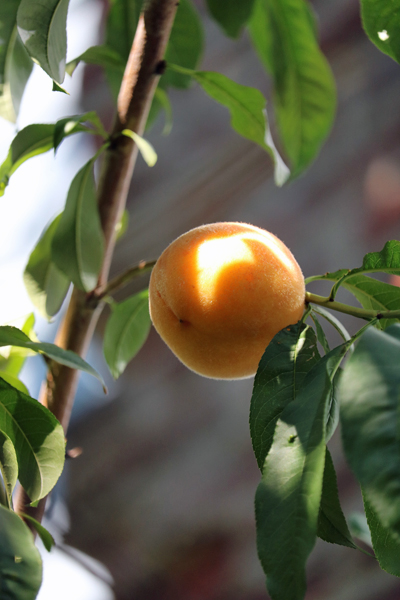 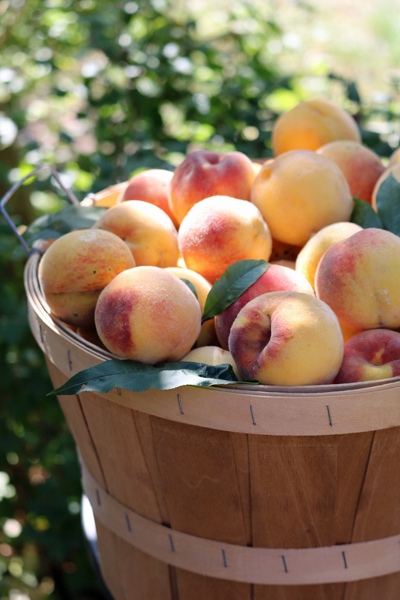 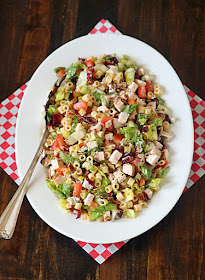 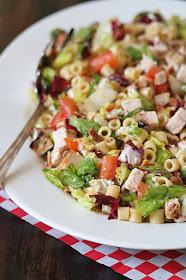 Back to the weekend...on Sunday, we took Jack out one more time for breakfast at The Broadway Diner.  I don't think it has ever taken me that long to eat breakfast.  I just didn't want the weekend to end and leave my baby.  He wanted to walk back to his dorm room, so we said good-bye in the parking lot and...yes, I cried again 😢.  But it wasn't as bad as the first time.  You see, I get to see him again in two and a half weeks!!  Doin' my happy dance! This is one of the few times I am more than happy to travel more than 8 hours for soccer games in Kansas City because we will drive right through Columbia and have dinner with our boy!
Nicole 3 comments:
‹
›
Home
View web version