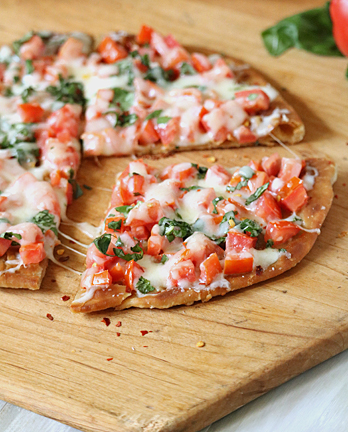 What do you do when you are craving pizza, but you don't want to crank up the oven to 575° F because it is hot as blazes outside? You make Thin-Crust Skillet Pizza, of course!
This is the perfect pizza to make this time of year when fresh garden tomatoes are at their peak and you have an abundance of basil growing in the garden, Those are not secret ingredients for a great pizza, but in this recipe there is one.  Beer (I use a full-flavored ale, like New Castle).  I know,  this is not a traditional pizza dough, but let me tell you it works.  Haven't you heard of beer bread?  What about beer in a fry batter?  The beer is used in lieu of yeast to achieve that yeasty flavor.  The baking soda is used for leavening.  Some of you might already be asking, "What can I use other than beer?"  I cannot speak from experience, but I suppose you could use water, although you might want to add just a touch of dry-active yeast for flavor.
The recipe makes two 9-inch pizzas and you'll need a 12-inch non-stick skillet.  Make sure that when you add the dough round to the hot oil in the skillet, gently lay the dough away from you to avoid oil splatter. The first side is cooked until deep golden brown and crisp, then the dough is flipped, the toppings are added, and the pizza is covered with a lid in order for the cheeses to melt.  (Watch your temperature so the bottom does not burn.)  Transfer to a cutting board, slice and serve.  😋🍕 Happy Cooking!
Printable Recipe

For the Toppings
In a medium bowl, toss together the tomatoes, garlic and salt.  Transfer to a colander and drain for 15 min. Transfer tomatoes to a paper towel-lined plate to remove excess moisture.  In another medium bowl, combine the cheeses and basil; refrigerate while preparing the dough.

For the Dough
In the bowl of a food processor, combine the flour, baking powder, sugar, and salt.  With the motor running, slowly add the beer and 1 tablespoon of the oil and process until the dough pulls away from the sides and forms a shaggy ball, about 1 minute.  Using floured hands, form dough into a tight ball and cover loosely with plastic wrap; let rest 10 minutes.  (Dough can be wrapped tightly in plastic wrap for up to 1 week.)
Divide dough in half. On a lightly floured surface, roll each half into a very thin 9-inch circle.  Heat 3 tablespoons of oil in a 12-inch nonstick skillet over medium heat until just smoking.  Transfer 1 dough round to skillet and cook.  Using the tines of a fork, gently poking any bubbles that form. Cook until the bottom is deep golden brown and crisp, about 3-4 minutes.  Flip dough and sprinkle with half of drained tomatoes and and half of cheese mixture. Reduce heat to low and cook, covered, until the second side is crisp and the cheeses have melted, about 5 minutes.  Transfer pizza to a wire rack.  Wipe out pan and repeat with remains oil, dough, and toppings.  Transfer pizzas to a cutting board; slice and serve.  Enjoy!
Source: Adapted from Cook's Country, Skillet Suppers 2011